Mainstream Green launched an initiative in 2020 by setting up and are managing a new Facebook group, Syracuse CNY Freecycle. With more than 500 members now, people are able to keep useful items they no longer need out of the waste stream while at the same time offering other people things they need and can make good use of, for free. Win win!

To combat "Covid" holiday season blues, we set up a special holiday program the "Gift Shoppe," where people who might not be able to afford gifts, can find something they might like to give to friends or family. A number of group members have donated nearly new or new items for the Gift Shoppe. 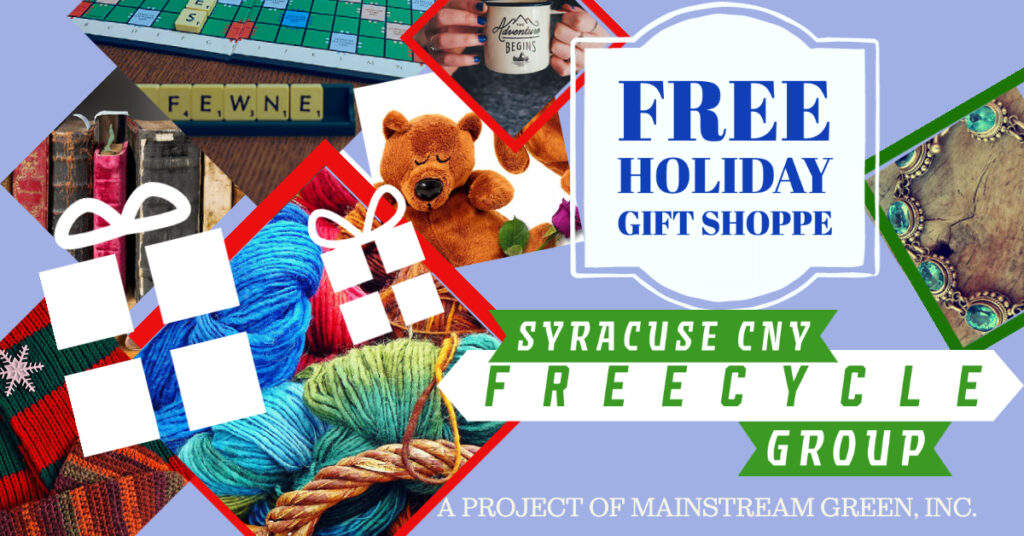 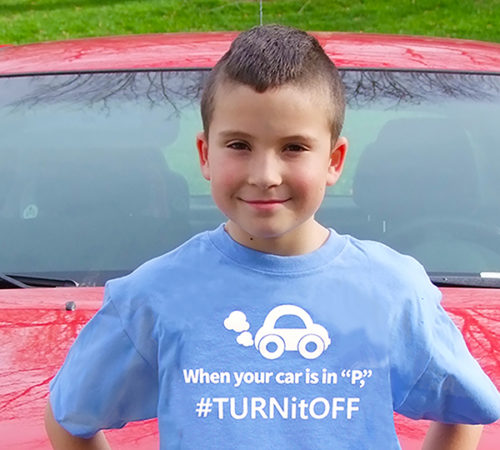 Love a kid & love your planet, at the same time, with #TURNitOFF anti-idling t-shirt!

Don't Idle Away Our Atmosphere!  Did you know: We waste 3.8 million gallons of fuel EVERY DAY in America, by letting our cars run while they are stationary? Burning 1 gallon of gasoline in a car engine produces 18.07 lbs of CO2.  Carbon traps heat in earth’s atmosphere.  If we avoid 1% of gallons used idling, we’d prevent release of 390 tons of carbon daily, with no drastic change to lifestyle.

Purchase one of these t- shirts and spread the message about idling!  When your car is in P, #TURNitOFF!

Available in Children's Small, Medium, Large and XL. These shirt are 100% cotton and Made In America! Proceeds go to Mainstream Green, Inc., a 501 (c)(3) nonprofit. Order now using this form, and we will send you an invoice you can pay online or with a check via US mail. All shirts are shipped via Priority Mail fixed rate boxes. 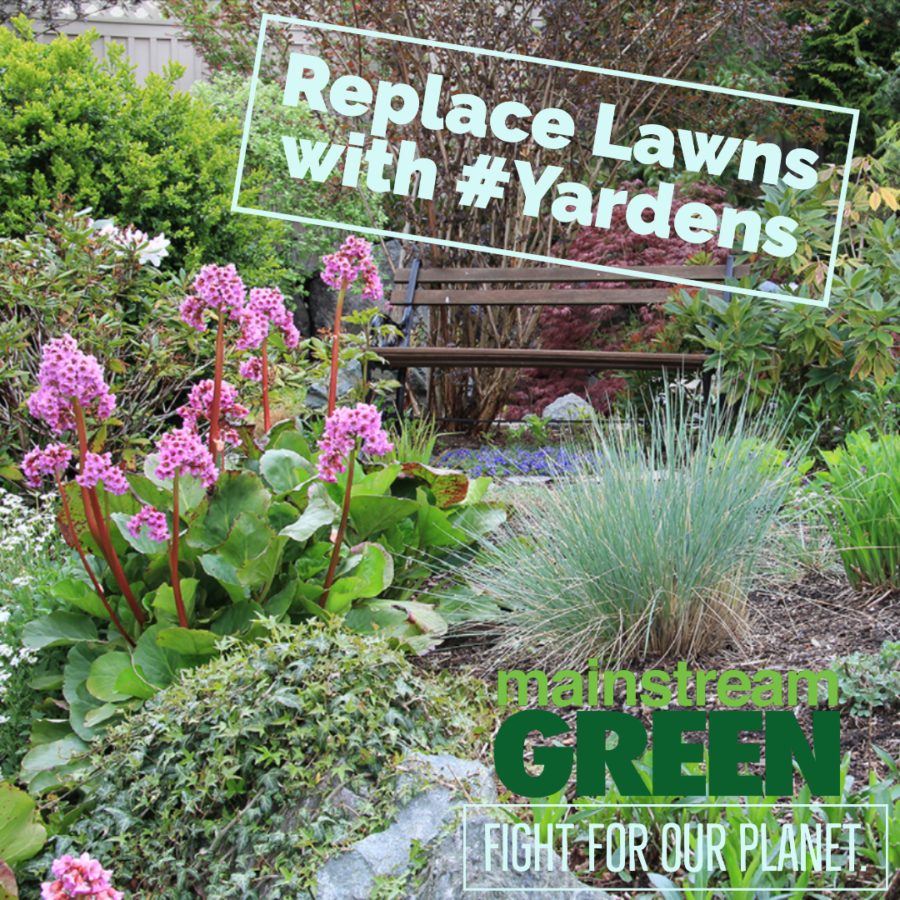 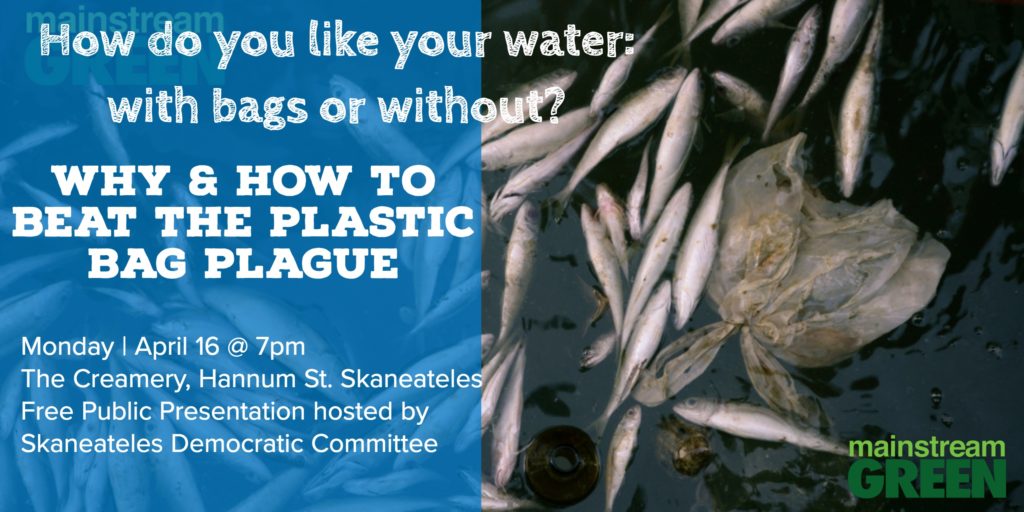 Why & How To Beat the Plastic Bag Plague: Dana Johnston, founder of the environmental charity, Mainstream Green, Inc., will provide a compelling multi-media presentation to show Why & How single use plastic bags and other plastic consumer disposables should be avoided like the plague they are. The public is welcome to attend this free event. A question and answer period follows the presentation. @ The Creamery, Hannum St. Skaneateles, NY 7 pm 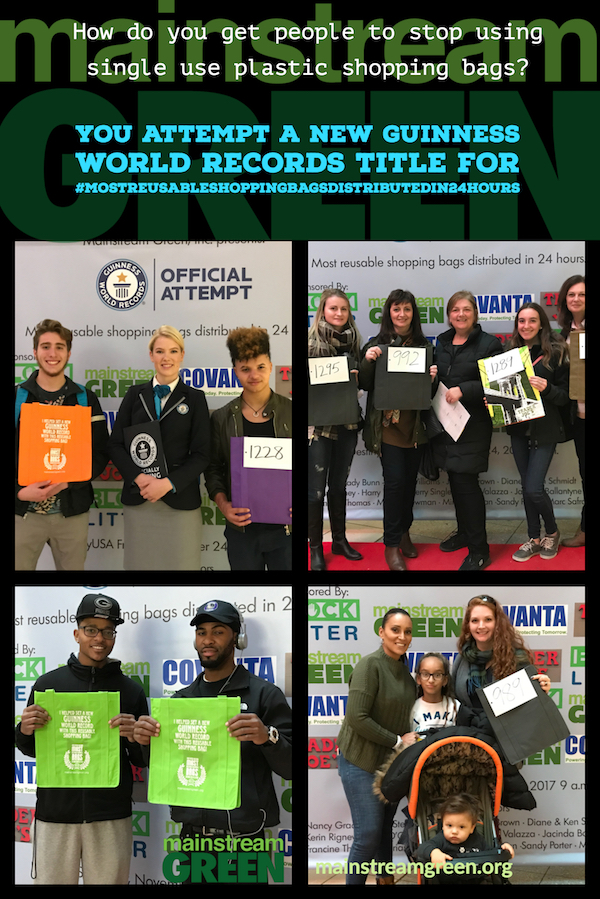 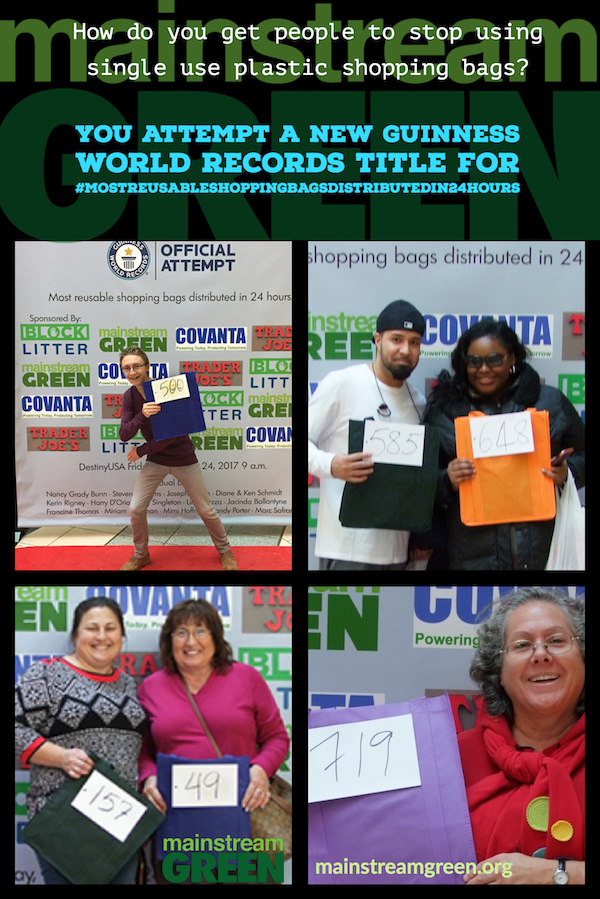 On Friday, Nov. 24, 2017, Mainstream Green, Inc., the environmental non-profit, led an attempt to set a first ever GUINNESS WORLD RECORDS™ title, Most reusable shopping bags distributed in 24 hours. The group needed to distribute 5001 bags to snag the title. They came up short.
“Our volunteers put on a tremendous effort to achieve the first ever GUINNESS WORLD RECORDS™ title but we were short of the 5001 bags required by Guinness,” announced Dana Johnston, President of Mainstream Green, Inc. “However, in this process, we learned enough to think that a second attempt, at a different location, on another date, with a different algorithm will succeed.”
This is the first time on Planet Earth that the title was attempted, as it was invented by Ms. Johnston, and then approved by the Guinness World Records officials.  However, the number set as a requirement by GWR to achieve the new title, 5001, is now under some scrutiny by Mainstream Green, Inc., as the group’s research subsequent to the event appears to show that the basis for that quantity is incorrect information. The Mainstream Green Board of Directors is reported to be planning to address that issue with GWR before the next title attempt.

“We are very grateful to our volunteers and supporters, and we want to give an enormous thank you to all the dozens of people who helped us along the way,” said Dana Johnston.

“The event was a great success,” she added, saying, “People really knew they were part of something special, and were having a lot of fun with the whole Guinness thing, and posing on the red carpet for selfies. We received wonderful media coverage, along with good social media buzz, which clearly went a long way towards encouraging greater use of reusable shopping bags and raising awareness about the harmful effects of plastic bag pollution.

“What’s best about what we did with our Guinness World Records title attempt is, the value of this event doesn’t end with this one day, because some 1500 Central New Yorkers will now be walking into Trader Joes, Aldi, Costco,Wegmans and other stores with the shopping bags they got here today. Every time they take our bag into a store, scores of people will see our bags with the words ‘Guinness World Record’ and “Reusable Shopping Bag” and they’ll get the message again and again and again — for months!”

“We found out which colors of reusable shopping bags consumers prefer,” reported Gayle McCabe, a Mainstream Green volunteer.  “Almost all women and some men preferred very bright, vibrant colors to dark colors. And the most requested color was purple!”

Mainstream Green is asking the many Central New Yorkers who took an interest in this, to join them in a second attempt in 2018.

“We have calculated that this next attempt will need about 80 people to hand out the bags simultaneously in one location, for at least 4 hours each, over a period of up to 8 hours, to hit our number,”  Ms. Johnston declared. “We hope folks will want to volunteer to help make this happen and that they’ll use link to sign up!”   http://eepurl.com/dbJmzf 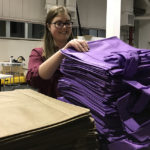 Jacinda Ballantyne, an “under thirty” electrical engineer, took a summer vacay at Tennessee music festival and lifestyle experience Bonnaroo (“where happy campers live, sleep, and play in blissful harmony like it’s permanent recess.”).  It was satisfying to her music loving and planet loving self.  She wrote the following, and gave us permission to publish it:

I just went to Bonnaroo music festival and want to share some of the ways they encouraged sustainability there. It was a great model of how to run a large event with thousands of people and still minimize waste!

1. Everywhere they had a trash bin there were also recycling and compost bins. Volunteers stood near the bins and informed people which bin they should use. (If I ever go back I think I’d like to be one of those volunteers!) And all the paper plates and cups were compostable!
2. They had water bottle refill stations scattered throughout the grounds to encourage people to join the “refill revolution” and refill their reusable bottles instead of buying plastic.
3. A discount was also offered on adult beverages if you purchased a “refill revolution” souvenir cup and used that every time you got another drink.
4. They gave each camper a blue recycling bag as well as a trash bag to use at the campsites.
5. There were solar powered charging stations for people to charge their phones since access to electricity was limited. (My phone died so many times but I found that the charging stations were a great way to make friends ?)

Overall I was very impressed with the effort they took to be green. I loved the saying on their signs: “recycle what you can, reduce what you can’t, and reuse what you’ve got.”