“A Sea of Plastic Bottles” is no joke. If we keep going as we are, by 2050 there will be more plastic than fish in the ocean.

We use #PlasticStuff so much in our homes and lives, it’s hard to imagine life before it was invented 110 years ago! Since then, some 5 billion tons of plastic has been produced.  And it’s all still here, somewhere on land or in the water, because it does not decompose for centuries, if at all.

So much plastic has accumulated in rivers, lakes, and oceans that it has infiltrated the food chain for animals and humans, with terrible results. Now 93% of Americans test positive for BPA, the plastic chemical, in their blood streams. This is very bad for our health, because it harms our endocrine and immune functions. When sea life, birds or other animals mistake plastic for food, and eat it, it kills them. 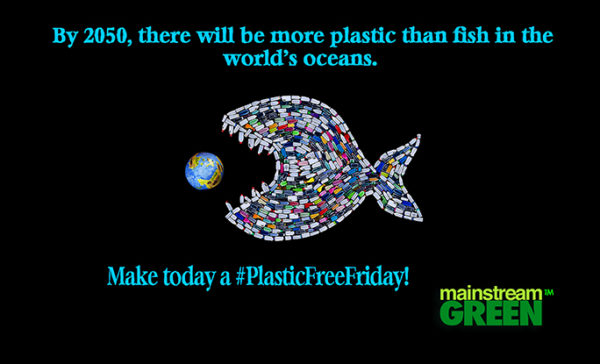 A place to start: Make every Friday a #PlasticFreeFriday. Don’t buy, accept or use anything plastic, one day a week. If you do it every week, your plastic consumption will be cut by 14+%.

While there are many important uses of plastic in medicine, aerospace, defense, and plumbing, there are so many wasteful and unnecessary uses of disposable plastic items, which we easily can avoid.

How does limiting our purchase and use of #PlasticStuff help fight climate change? Most #PlasticStuff is made from petroleum based fossil fuels. Fossil fuels are hydrocarbon deposits, such as petroleum, coal, or natural gas, which were formed some 300 million years ago, from remains of ancient plants and animals. When fossil fuels are burned, carbon dioxide and other greenhouse gases are released. They are called greenhouse gases because they trap hot air close to the earth, in the atmosphere. That is why burning of fossil fuels is considered to be one of the principal causes of climate change.

US consumers throw away 100 billion bags each year. Since plastic bags are a petroleum product, this is the equivalent of dumping out 12 million barrels of oil every year. What a waste! 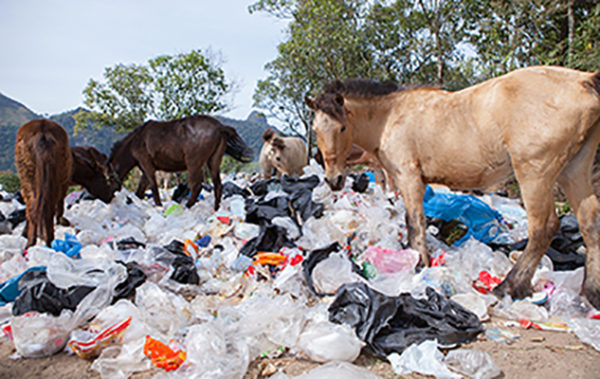 What’s wrong with this picture?

720,000 plastic shopping bags are consumed in the United States every minute.  US consumers throw away 100 billion bags each year.

Plastic bags blow around in the wind, catching on trees and shrubs, shredding into thousands of little pieces. These tiny pieces fall into lakes and streams, then flow into larger lakes, rivers and then finally the oceans.  Some plastic bag pieces get sucked into water purification and sewage treatment plants, where they damage pumps and pollution fighting equipment.

According to the United Nations Environment Program, plastic bags account for more than 50 percent of all marine litter, with 46,000 pieces of plastic for every square mile of ocean.

How do you like your water? With bags, or without?

Reusable shopping bags are much better for the planet and all creatures on it.

You only have to remember 2 things to be a Reusable Shopping Bag Success: 1) put the bags in your car, and 2) take them into the store!